The Fantasy FUT promo brought a whole load of live cards to FIFA 22 Ultimate Team, with each able to get a possible +3 boost to their overall rating.

Keep on top of all the latest card upgrades below, and find out whether your investment was worth it.

All clubs that have a card represented in the Fantasy FUT promo have now played at least one game, and the first upgrades have now gone live!

Ousmane Dembele owners will be jumping with joy, after a win and an assist meant his card gained +2, now at an outrageous 94 OVR.

The EA mishap that gave many gamers a free Fantasy FUT Christian Eriksen will now be celebrated further, after a resounding 4-1 away win at Chelsea and a goal means he also gets a +2 bonus, sitting at 92 OVR.

The only other player to gain a double upgrade was also from the Premier League, with Lucas Moura getting an assist in their win, to see his card also boosted to 92 OVR. 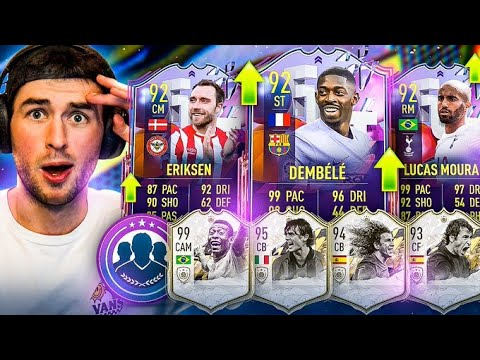 Fantasy FUT brings a new dimension of live, dynamic item to FUT 22, with big initial boosts and – starting Friday, 1 April – the chance for players to earn up to +3 OVR upgrades based on their individual contributions.

The Fantasy FUT players will receive an initial upgrade at the campaign launch and will then have the possibility for a further +3 OVR upgrade.

Fantasy FUT cards will get a +1 upgrade when: