Find out how to take on Tapu Koko now that it has returned to raids in Pokemon GO!

Lots of Alolan legendaries are returning to raids as part of the end-of-season event! Among them is Tapu Koko, so if you missed your chance to catch one at the start of the Season Of Alola, now’s your chance!

To catch Tapu Koko in the End-of-Season Alola to Alola event, trainers will need to first defeat it in a raid battle. This means you have to battle an incredibly strong Pokemon with other trainers.

Once the Pokemon is defeated, its CP will drop to a lower level, and trainers will have the opportunity to catch it. We recommend stocking up on Razz Berries and Golden Razz Berries, as Tapu Koko is a difficult Pokemon to catch!

Of course, in order to catch Tapu Koko, you need to be able to defeat it. Here’s our expert guide to defeating Tapu Koko in a raid!

Read More:Pokemon GO: How to Access Alola to Alola End of Season Research

As with most 5 star raids, Tapu Koko is impossible to defeat with just one trainer. We recommend tackling Tapu Koko with at least two other friends.

While Tapu Koko is a difficult raid boss, we have everything you need to know in order to win the raid. Andiamo!

Tapu Koko is a powerful legendary Pokemon with high stats. It has the following stats in Pokemon GO:

Additionally, it is an Electric/Fairy-type. This means it has the following resistances in battle:

This means that you should not attempt to take on a Tapu Koko Raid using any of the above types. Tapu Koko has a double resistance to Dragon, meaning Dragon-type attacks like Outrage will deal negligible damage.

In a Tapu Koko Raid, you need to choose Pokemon that can withstand its powerful attacks. Here are the fast and charged moves that Tapu Koko uses!

This means that Tapu Koko can hit the following types for super-effective damage:

Because of this, you need to pick your Pokemon carefully to ensure Tapu Koko cannot defeat them. Thankfully, we’ve picked out the best Pokemon to choose!

Tapu Koko is a difficult Pokemon to face because of its powerful attacks. Because of this, the best Pokemon to bring to a Tapu Koko Raid are strong Ground Pokemon.

Ground Pokemon resist the majority of Tapu Koko’s moves, meaning they can last a long time in battle. Plus, they can deal super-effective damage with powerful Ground-type moves like Earthquake and Mud Slap! 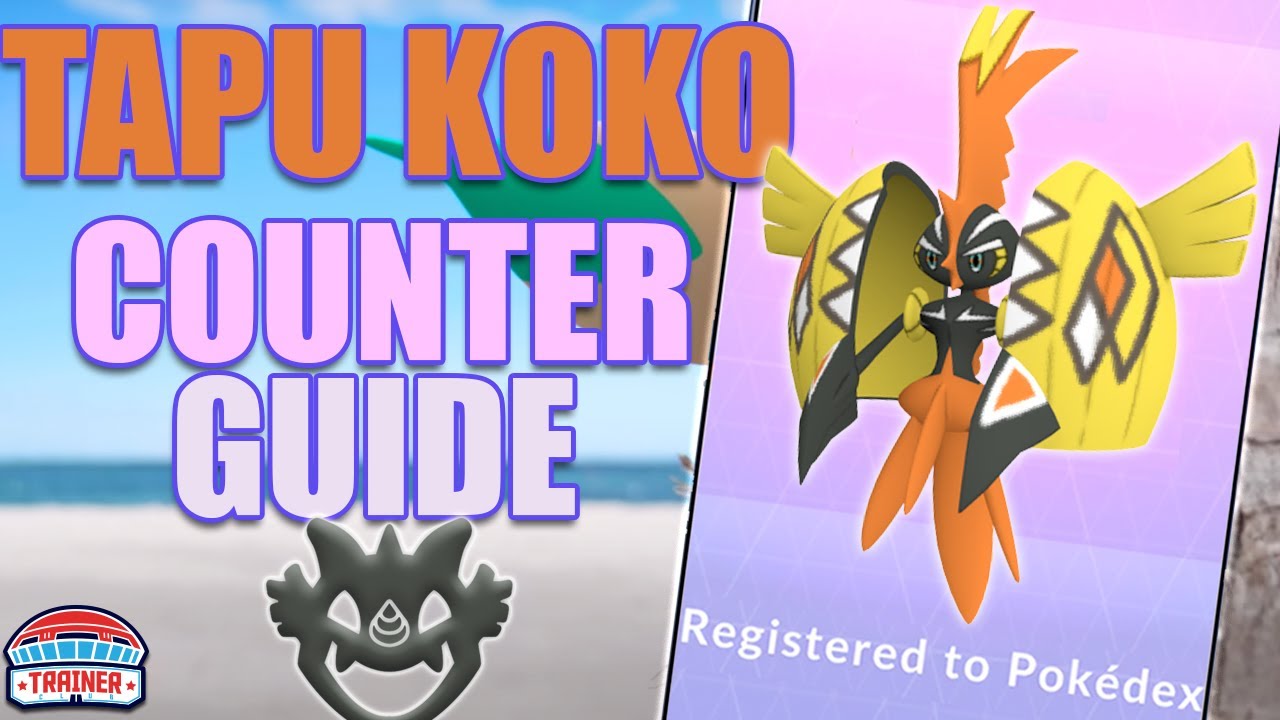 Tapu Koko also has a weakness to Poison. If you don’t have enough strong Ground-type Pokemon to use, then strong Poison-type Pokemon are also effective options.

While these are not the only Pokemon that can be useful, here are the 10 best Pokemon to use in a Tapu Koko raid. Make sure you equip them with powerful Ground-type moves!

Tapu Koko is a powerful opponent, but can also be a great teammate inPokemon GO. Find out if it makes our best Pokemon for raids May 2022 guide!

There’s lots to look forward to this month in Pokemon GO. The next event is the Alolan Geodude Community Day – check out our event overview.

Don’t miss our raid guides for the other returning legendaries in Alola To Alola! We’ve got them all listed below: